Multiple arrests made thanks to the bait bike program

Three men have been arrested recently thanks to the North Vancouver RCMP bait bike program.

On July 22, a local man was taken into custody by North Vancouver Special Response Team after he was caught riding a freshly stolen bait bike. On July 6, a Port Coquitlam man was quickly arrested after he was located riding one of our many bait bikes. In June, a third man was arrested while riding a bait bike he had just stolen. The men were all released with future court dates and charges will soon be forwarded.

There has been a program in North Vancouver since 2014. It was the first of its kind in BC and other RCMP detachments have modeled their programs around North Vancouver’s program, said Cpl. Lauren Kildaw of the Special Response Team. We have a large fleet of bait bikes of every kind ranging from road racing to full suspension downhill bikes. 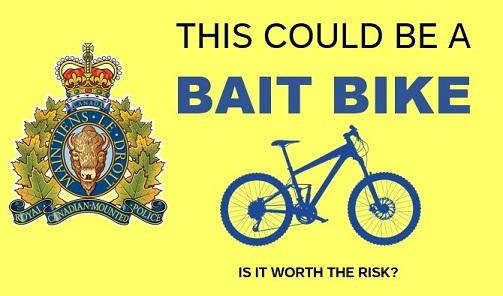 View Larger Image: RCMP crest and a bicycle saying "This could be a bait bike. Is it worth the risk"

We encourage bike owners to register their bikes with 529 Garage at www.529garage.ca. Registering a bike with '529 Garage' will increase the ability of the police to return a stolen bike to the proper owner.