Yes, we have bait bikes and no, we won't say where they are

North Vancouver RCMP have kept their bait bike program under wraps since it was launched some time ago. Today, as the cycling season starts to ramp up, we're telling the community that the program is alive and well, and regularly captures thieves looking to rid people of their rides.

"It's partly to let people in North Van know that we hear their complaints, we know this is a problem, and we're working hard to tackle it," said Sgt. Peter DeVries of the North Vancouver RCMP. "And it's partly to send a message to any would-be bike thieves. If you come to North Van to steal a bike, you'll never know if it's one of ours until it's too late." 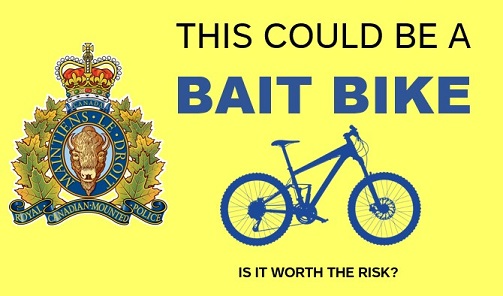 Police are remaining tight-lipped about details of the program in order to protect its integrity and maximize its effectiveness. "We don't want to say how many we have, but we'll say it's quite a few. And we won't say how many arrests we've made, though we'll say it's more than a dozen. Let's just say our bait bikes are proving effective, they can be anywhere in North Van, we know the instant one is stolen, and we'll be waiting right around the corner."

New signs will also be making an appearance throughout North Van, said DeVries, warning would-be thieves, and encouraging them to think twice.