North Vancouver RCMP, in partnership with Sḵwx̱wú7mesh Úxwumixw (Squamish Nation), are seeking public assistance to identify who was responsible for committing mischief to a memorial carving outside the former Sisters of St. Paul convent on Sixth Street in North Vancouver some time before January 24, 2022. 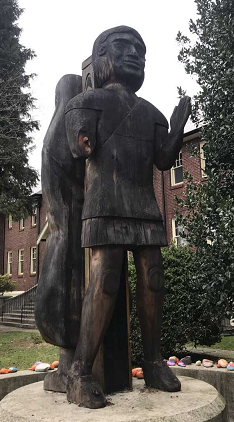 Vandalism to the carving, which stands outside the former Sisters of St. Paul convent, was discovered January 24 by members of Squamish Nation and reported to police. "We were shocked and saddened when we discovered that the monument had been vandalized," said Squamish Nation Spokesperson Sxwíxwtn (Wilson Williams). "This act of vandalism has caused immense grief to Residential School survivors and their loved ones." The carving memorializes those children of Sḵwx̱wú7mesh (Squamish), səl̓ilwətaɁɬ (Tsleil-Waututh), shíshálh (Sechelt) and xʷməθkʷəy̓əm (Musqueam) Nations who were taken from their parents and forced to live at St. Paul's Residential School.

"Thus far, we have not been successful in identifying who was responsible," said Sgt. Peter DeVries of the North Vancouver RCMP. "Today we are asking for the community's help. If you have heard something, if you saw something, or if you know anything at all, please report it."